It’s been three days since I gave up social media and started to focus more on my spirit and surroundings. I have done extended social media breaks before but this time feels different. When I left social media in the past, the first few days were filled with anxiety because of FOMO – FEAR OF MISSING OUT. I would wonder what hilarious hashtags were trending on Black Twitter or if I missed some big news on Facebook. Eventually, I would settle in to my social media-less existence but I always felt slightly uneasy. I have built most of my freelance career and connections on Twitter, so it was always hard to sign out and delete my app.

The past few days have felt incredibly liberating. I haven’t given social media a second thought and I don’t want to sneak a peek at Facebook or Twitter (the only two social apps I use because I’m an old lady). My creative juices are starting to move from a trickle to a light stream as I do more research and world building for Orion’s Chains – my upcoming science fiction/fantasy novel with a Black woman protagonist. I’m mapping out and creating rules for her world. It gives me indescribable joy to create this body of work and I hope to be finished by Summer 2018!

I am also spending more time reading. I just ordered Don Miguel Ruiz’s best selling book The Four Agreements. The novel is an Oprah fave and discusses beliefs that limit our potential and cause us to live less joyful, fulfilled lives. I have heard about this book for years and now I’m finally going to give it a try! I’ll be posting my thoughts and the connections I make with my own life here. I found this handy chart of the agreements on the book’s website fouragreements.com: 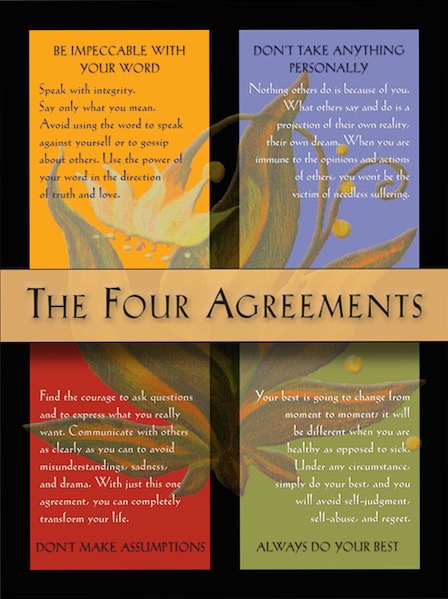 My meditation and prayer practice has made a triumphant return and I feel less stressed overall. I have a big writing assignment due at the end of this month, so meditation before bed has helped me wind down after my nightly writing sessions.

My goal for this blog is to post on Sundays and Wednesdays…for now. Hopefully, more people will become invested in my journey and I’ll have time to squeeze in an extra post 🙂
Have a great day and live well ❤️